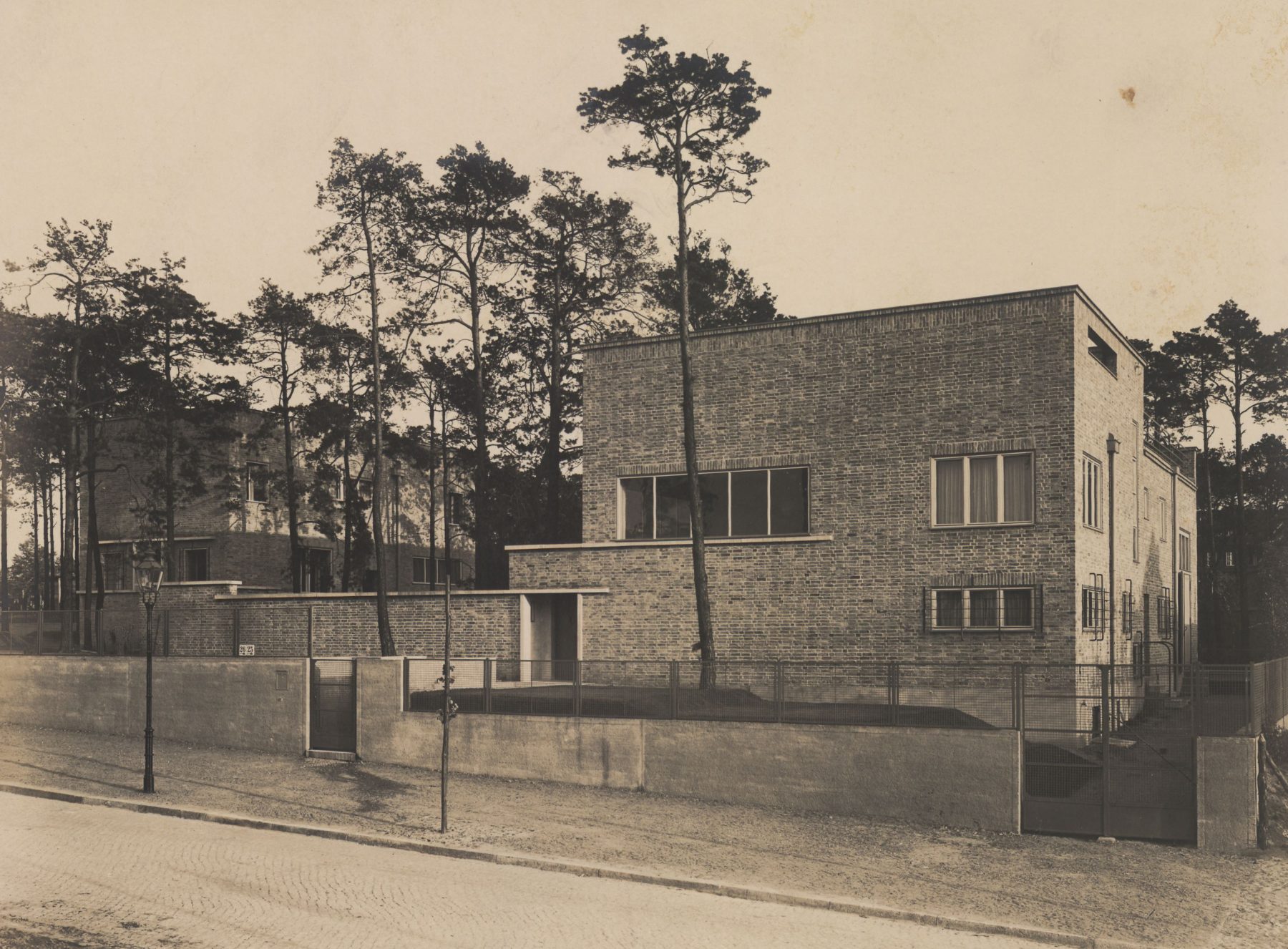 In the late 1920s, the sculptor Georg Kolbe created his own personal studio house and residence in Berlin’s Westend district, close to the city and at the same time on the edge of the Grunewald forest. His new retreat was intended to provide space for the fertile combination of art, nature and architecture that was important to him all his life. In conjunction with collaboration with architects such as Ludwig Mies van der Rohe, Hans Poelzig, Bruno Taut and Walter Gropius, Kolbe played an active role in the contemporary discourse concerning modern architecture. Kolbe’s own artistic oeuvre is particularly influenced by his keen interest in the relationship between sculpture and space. In 1950, the artist’s former privately used studio house was made accessible as a public institution – and the first museum to be newly founded after the war. To this day, the cubic brick buildings with their ceiling-high windows overlooking the spacious sculpture garden convey the modern spirit of their times.

In May 1928, Georg Kolbe purchased a former wooded area on Sensburger Allee in Berlin-Westend as the site for the new buildings he was planning. The reason for choosing this location was its proximity to the Heerstraße cemetery, where his wife Benjamine, who had died the previous year at the age of only 45, was buried. Kolbe knew the Basel-born architect Ernst Rentsch (1876-1952), who had been working in Berlin for some years, having portrayed him as recently as two years earlier, in 1926. During the planning phase, the sculptor and client intervened several times in Rentsch’s architectural designs for the buildings in order to realize his concrete notions concerning the ideal creative space. The buildings were to be functionally oriented to his working methods and at the same time to show off the sculptures to their best advantage in the architectural context and in harmony with nature. This planning phase is documented in various annotated construction plans, which are now in the Georg Kolbe Museum.

In July 1928, Rentsch submitted the plans for Kolbe’s studio house to the municipal building authority. The shell was completed in October and Georg Kolbe was able to move in as early as January 1929. The building was completely tailored to meet his personal and professional needs with the light, large sculptor’s studio surrounded by small, simple private rooms on two floors in the rear area. A representative living room was dispensed with in favor of a so-called living studio with bookshelves and an armchair as well as a large drawing table under tall windows. The adjoining sculptor’s studio is especially characterized by its light-filled design. It opens onto the garden with tall windows and has a skylight that extends almost across the entire ceiling. The second building, constructed next to the studio house, was occupied by Kolbe’s daughter Leonore and her family in June 1929. In addition to living quarters, it also housed a studio for her husband, the painter Kurt von Keudell.

The need for a studio for working with clay led Georg Kolbe to expand his property by purchasing additional land in October 1930. In April 1932, Bauhaus student Paul Linder submitted a construction plan for the new studio building, which was quickly implemented and followed by various smaller building measures. For example, the working terrace between the large studio and the clay studio was screened off at the sides by a glass wall in 1933 and supplemented by a glass roof in 1935. In the same year, a section of the garden was turned into a sculpture courtyard, which served the sculptor to simulate the effect of large sculptures in an outdoor architectural space. In the same year a balcony was added on to the south side of the house.

As the sculptor had stipulated in his 1943 will, his home was incorporated in the George Kolbe Foundation upon the sculptor’s death in 1947. The Georg Kolbe Museum opened there in 1950. In the 1970s, the former home of Leonore and Kurt von Keudell was acquired by the Deutsche Klassenlotterie on behalf of the Georg Kolbe Foundation and has been a part of the museum complex since then. It now houses the museum café named after Georg Kolbe’s wife Benjamine, as well as workrooms and the museum’s library.

After two decades of use by the museum, it became apparent that the premises of the former studio building no longer offered sufficient exhibition space. A three-story extension was consequently realized by the Berlin architects AGP*. In order to create the necessary space, Paul Linder’s former clay studio was demolished, while the original studio building from 1928 was largely preserved. The design of the new building is subdued by its clear forms and the light-colored facade made of African sandstone. Since 1995, it has served as an exhibition space on two floors and also houses a storage facility suitable for modern museum operations and low-barrier access via an elevator.

In the mid-2010s, an urgently needed thorough renovation of the historic building ensemble, which is now almost 90 years old, was begun. This was carried out in several stages in the years 2016-2021. The renovation was carried out on the basis of the original plans by the firm of Brenne Architekten, which specializes in historical structures and was made possible by the Stiftung Deutsche Klassenlotterie and the Landesdenkmalamt Berlin. Since 2021, the museum, including café and garden, has been shining in new splendor, honoring and sustainably emphasizing the original character of the now listed ensemble.