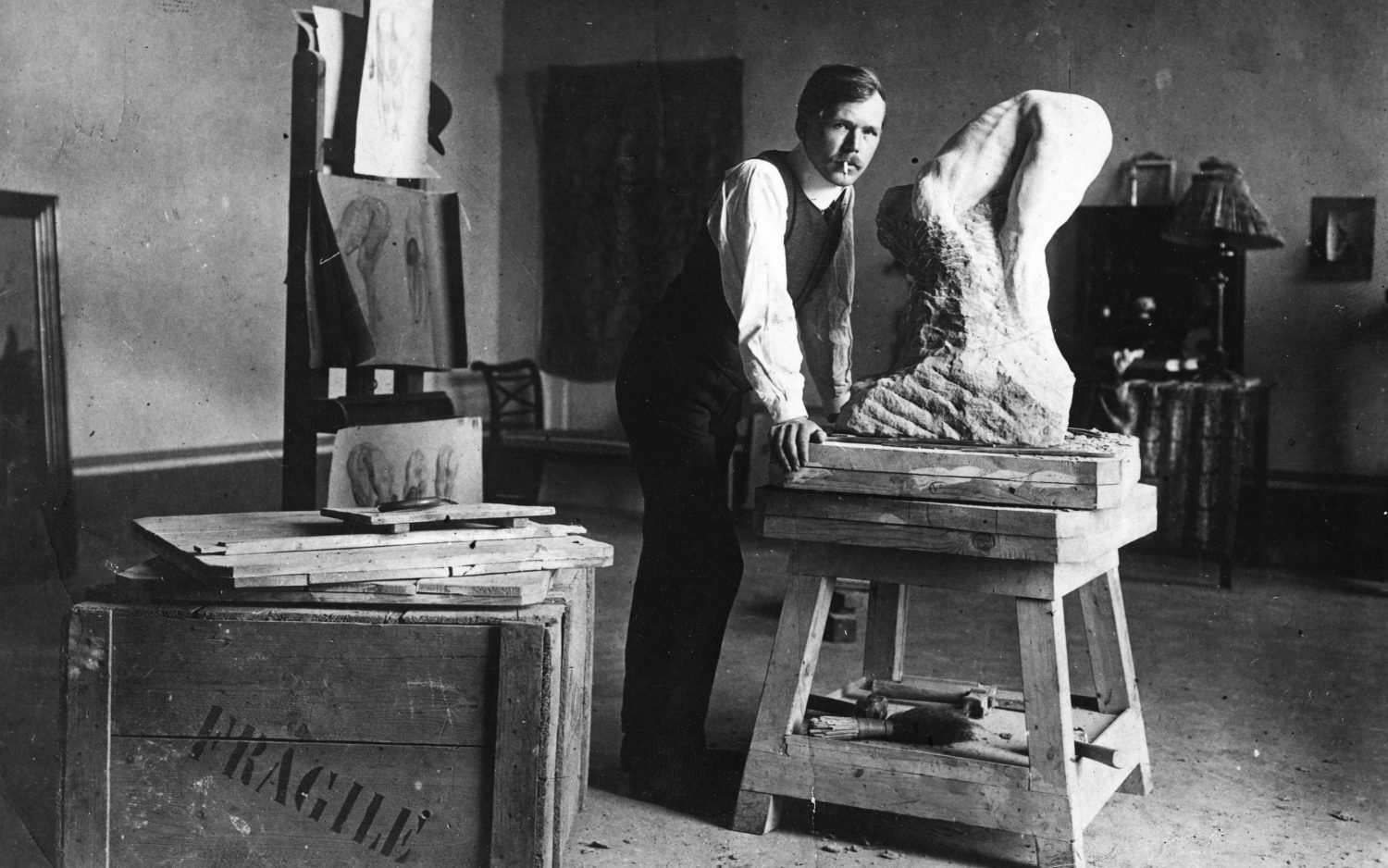 Georg Kolbe (1877-1947) is one of the most important sculptors of the first half of the twentieth century. His idealized nude sculptures are an expression of his intense occupation with the depiction of modern man. His artistic breakthrough came in 1911 with his figure „Dancer,“ which was followed by numerous sculptures inspired by the movement of modern dance. Kolbe’s expressive female figure „Morning“ came to be installed in Ludwig Mies van der Rohe’s Barcelona Pavilion of 1929, now an iconic modernist building. Walter Gropius, Hans Poelzig, and Henry van de Velde also appreciated his sculptures and saw his work in relation to their architecture. Kolbe was involved in the secessionist associations of his time and was in close contact with artists such as Max Beckmann, Renée Sintenis, Ernst Barlach and Karl Schmidt-Rottluff.

Initially trained as a painter and draftsman, Georg Kolbe turned to sculpture around 1900 during an extended stay in Rome, in order to recognize in sculpture his life’s task as an artist. What drove him again and again was the attempt to find a form in harmony of body and spirit, a valid expression for humankind’s inner movement. Accordingly, he used the term „expressive sculpture“ for his art. After moving to Berlin in 1904, the sculptor found his own formal language at the end of the decade. In 1911/12, his nearly life-size sculpture „Dancer“ was acquired by the then director of the Berlin National Gallery, Ludwig Justi, as the first example of modernist sculpture for the museum’s collection. The depiction of the young, graceful woman, completely immersed in dance-like movement, was clearly regarded as a symbol of a new understanding of modern sculpture. The figure left behind everything mannered, cloying and rigid in art from the time of the German emperors in favor of a body-emphasizing concept of beauty and art amidst a young, yet self-confident bourgeoisie. A new, free human being emerged, who was able to dance his or her way out of the shackles of the past.

The nineteen tens in Kolbe’s oeuvre are animated by delicate, sensitive, and supple bodies that, as it were, meet the multifaceted nature of their world and its challenges on tiptoe. An impressive example of this important phase in Kolbe’s early work is the small sculpture of the Russian star dancer Vaslav Nijinsky, to whom Kolbe dedicated a full-figure portrait of extreme charm and gracefulness. Dance, and especially its new forms of expression developed by artists such as Gret Palucca, Vera Skoronel, Charlotte Bara, and Ted Shawn, remained an important source of inspiration for the sculptor until the end of his life.

Kolbe’s work is always accompanied by fine and, as it were, powerful drawings in which the artist consistently worked to capture the human body in all its motions. The medium, learned at the outset and skillfully mastered, gave him a lightness on the basis of which he could provide generous pictorial and idealized space to the sculptural treatment of his subject. Drawing, as well as the printmaking activities that resulted from it, also constituted an important pillar in Kolbe’s artistic career. They were popular items for sale at the Paul Cassirer Gallery, and Kolbe’s early patron and influential Berlin art dealer owner played a significant role in their commercial success. From today’s perspective, Kolbe’s drawings are among the most modern and probably also the most beautiful that the artist created in the course of his career.

In the nineteen twenties, Georg Kolbe arrived at his mature style that still enjoys a high degree of popularity today. In particular, his repeated collaborations with internationally outstanding modernist architects reveal how strongly the sculptor thought through new notions of space and proportion, volume and lightness, outline and perspective in his work and also sought new solutions in this field. The best-known example is the installation of his 1925 sculpture „Morning“ in the Barcelona Pavilion designed by the influential architect Ludwig Mies van der Rohe for the 1929 World’s Fair.

In the nineteen twenties, a heavier ideal of the body, characterized more by vigorous sport than by dance-like lightness, also enters Kolbe’s sculptures. Both „Morning“ and „Night“ show athletically trained energetic female bodies. They pay homage to a self-confident, rather androgynous ideal of beauty and thus stand in contrast to the youthful delicacy of his early figures. On the other hand, the sculptor himself must have felt the loss of his strength; after the death of his wife Benjamine in 1927, he fell into an artistic as well as personal crisis, which he reported in numerous letters to friends and confidants. From today’s perspective, the late sculptures from the last 15 years of his creative life appear less imbued with the desire for new pictorial solutions than with an increasingly rigid redundancy. The expansive movement of the earlier figures gave way to static, almost invariably standing postures without any discernible compositional curiosity or the sophistication of the earlier conceptions. Diminishing eyesight due to illness and a recurring bout with cancer that would lead to the artist’s death in 1947 may have contributed to this change. In particular, however, due to ever an ever greater, often larger-than-life execution, an increasingly undifferentiated physiognomy, as well as a physically radiating pathos of overcoming are all too easily interpreted from today’s perspective as harbingers and later as witnesses of a vigorous Germanic bodily ideal of the National Socialists. Kolbe himself was never a member of the NSDAP, never created a bust of Adolf Hitler, rejected the inhuman ideas of the new German rulers from the bottom up, private letters and documents suggest. Nevertheless, in the opinion of many, he did not distance himself from the regime clearly enough in public and did not reject every honor or award presented him by those in power at that time.

From today’s standpoint, the artist’s biography is full of breaks and contradictions, which we, as members of later generations, have to endure. Beyond art-historical judgment there is the necessity of a time-historical classification of artistic production.